ZzzziiiiiiinnnG! SnAp, CrAcK, sNaP, FssswwwhkhwwwiaK… Sniper fire accompanies the screeching hot tires and the roaring engine of a racing VBIED (Vehicle Born Improvised Explosive Device) are obvious signs that the ‘Escalation of Force’ was “not adhered to” as the driver races toward the Hesko barrier ECP (Entry Controlled Point).  The sounds of the Ma-duce (M2)… ratta-tat-da-tat-da-tat, ratta-tat-da-tat-da-tat-da-tat, ratta-tat-da-tat-tat, and multiple M16s… ta, ta, ta, tatata, tatata, some with grenade launchers attached, resonated as they bounced off of the weighted vehicle and lit up the morning sunrise while the incoming attack sirens sound.  As I jump from my bed, and my feet land on the floor, ‘THwuMP’, I don my bullet-proof vest and Kevlar helmet, grab my M16 rifle and head to the concrete bunker for accountability and my orders.  This is an all too familiar routine, but it’s my life now.

The ‘Incoming’ sirens sound louder today.  They usually aren’t that loud. I’ve heard these sirens MANY times before, but this time… ‘BOOM’, “1 ONE THOUSAN…” ‘BOOM’, “2 ONE THOUS…” ‘BOOM’, “3…” ‘BOOM’, ‘BOOM’, “I didn’t hear the outgoing cannons go off this time” my ‘battle-buddy’ says ‘BOOM’, “THAT’S SIX” someone yells from over ‘there’ on the other side of our office trailer.  “Damn, that’s close!” someone else yells.  “Too close!” says another person.  “They’re walking them up on us… straight toward us.”  As the trailer floor shakes, it throws the computer screens around like an earthquake and the sound of dirt hitting and falling down from the metal siding reminds me of sleet falling on a tin roof.  As the “Iraqi drive by” concluded “we need accountability of everyone NOW” our XO, the commanding officer of the ASP (ammunition storage point) ordered.

As radio communication begins and reports of “’Pvt Snuffy with 6 accounted for, Sgt Sargent with 3 accounted for, 8, and then 2…” come rolling in; a few minutes after “in sequence, report” was given, I fade back to my family, the birthdays that I’ve missed, and the first steps of my 3rd daughter that I had to watch on the webcam.  I think of their first dates that I’ll miss, playing catch with my son in the lawn, teaching them how to shoot guns and change the car’s oil… this is my life now.

Sacrifices are made, regrets and sacrifices.  My fellow Soldiers need to be accounted for and protected, that is my first priority… then, and only then, AFTER that can I be concerned about my family… “back home;” “Duty First” was our motto.  “Home…” now that’s an interesting concept.

I’ve heard it said… “home is where your heart is” or “home is where the Army PCS’ (moves) me to next.”  Growing up though, “home” never meant that SO many adjustments had to be made, so many apologies given to the family, or that so many friendships having to be limited, because you KNEW that “home” was one PCS away.  Those that said, “home is where the Army PCS’ (moves) me to next,” usually have a ‘family tree’ style sign, you know the one that has the chain linking all of the boards together.  This military version shows all of the locations that they’ve been assigned to and possibly the unit also.  For example: Main board – Last name, second board – Basic training – Ft. Benning, GA, assigned unit – Ft. Lee, VA, etc.  Mine would be: SSG DeMaris – Ft. Leonardwood, MO – Aberdeen, SD. 452nd Ord. Co. (x1 deployment), 593rd RSC – Ft. Lewis, WA. HHC, 80th Ord. BN., – Ft. Riley, KS. A Co. 601st ASB, CAB (x2 deployments) – Ft. Richardson, AK. HHC, 725th BSB, 4/25 ID (Airborne).  “Home”… ya, that’d be nice… I’d like that, maybe someday!

After the back procedures and all the paperwork was ‘finally’ done, only 2 years later, I thought that I was done with the Army… ya, no!  The PTSD truly set in and my acceptance came to a realization when the SFC, Sergeant First Class, sat in front of the platoon telling us a story that sounded like he had been reading my journal.  Ha! Ya, right, like I wrote in a journal, I was too “manly” for that.. but if I had written one… he stole it and read it aloud for everyone to hear what I was and had been going through.  But… how did he know my thoughts?  I didn’t tell anyone, not even my wife.  This way I had “protected” her, and the rest of the family, from all of the… ‘ekhem’… “bull *crap*” that I had gone through or thought that she’d be better off not ‘experiencing.’  “Dude, you gotta talk to someone, anyone! or this will eat you alive” the SFC said over lunch.  (The above is a picture of an unknown soldier.) 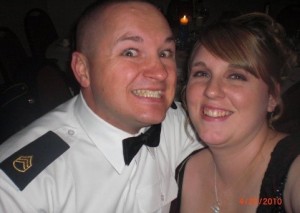 I never really knew that every time I suffered… she suffered either with me, for me, or in her own way and for her own reasons.  I never really considered that.  I tried SO hard to protect her, but I finally realized I wasn’t the strong one… never was.  She was FAR stronger than I could have ever tried to be!  THAT is why God brought her into my life!  So when I FINALLY got enough nerve to talk to her, she replied “ya… I know, I figured as much and when you were ready, you’d tell me.”  She didn’t see me any differently, she just loved me and tried anything to help me with what the Army had changed about me.

We all join the military, or don’t, for our own reasons.  Some because it’s in our bloodlines: our dad, grandpa, uncle, brother, etc. all joined, so…; some the feel of an obligation to… (fill in the blank); some to take on the world’s terrorists; some for the adventure and “excitement;” some were persuaded by the recruiter; like me, some for educational benefits; some out of love for our country and fellow American(s).  Whatever the reason, we all go through our days after our military service for the one reason that we have in common, good or bad… for Them!

I now wake up to the rooster’s crow, go out and check on the goats, feed the cows, say “hi” to the kittens and bunnies, and let out the turkeys, ducks and rest of the chickens.  All while knowing that my wife is working hard not only in the home, but also at her new job where she recently got promoted… Dang she’s so good!  And Hot!  I hear a lot more laughter these days versus the initial days after a return from a deployment or when I didn’t want to accept my new limitations.  I’ve learned how my mind and my body is coping and reacting to things differently now, but I still have those “bad” days, hours, minutes… I can’t seem to shake them.  It still is frustrating!  However, I am empowered by two things in my life.  First and foremost is God.  With His mercy and grace, I can and WILL overcome!  And ONLY second to God is my amazing wife and kids, who give me the love and strength to set new goals, reach beyond the reminds of the pain in my back and to fight for the laughter of tomorrow.  For them, THIS is my life now…

Helping women find purpose, develop a deeper relationship with God, and help each other through God's Word. View more posts

2 thoughts on “For Them”

This site uses Akismet to reduce spam. Learn how your comment data is processed.