I recently volunteered to make a batch of scotcharoos for an event at my kids’ school. In case you don’t know what scotcharoos are, they are gooey, crunchy bars made with peanut butter and chocolate. I have an incredible recipe that my mother-in-law, Laurie, gave me that was her mom’s recipe. While I had all the ingredients on hand, I decided to make a batch for our youth group and a batch for the family. 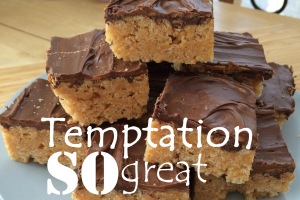 Then it dawned on me: the chocolate chips are out on the counter. So I quickly go into the kitchen and ask very firmly, “Are you eating the chocolate chips!?” My sweets-loving son burst into tears and said, “Yes! I don’t know why, I didn’t want to, but they were just so tempting…”

At that moment, I grabbed him by the shoulders and pulled him into me and hugged him while I choked back tears of my own. I had never heard anything so honest before.

“I don’t know why, I didn’t want to, but they were just so tempting…”

Paul writes about this very dilemma in Romans 7:15, “I do not understand what I do. For what I want to do I do not do, but what I hate, I do.”

Time and time again in our lives, we find ourselves doing exactly what we shouldn’t and avoiding the things we know we should do. It’s not because we are careless or corrupt. It’s because we are human. Sinners. Tempted at every turn.

Tempted to yell at our kids.

Tempted to gorge ourselves on tasty food.

Tempted to say a swear word.

Tempted to tell a lie.

This is such a simple message, but so important. I am comforted in knowing that we do not have to succumb to our temptations: 1 Corinthians 10:13 gives us a promise: “No temptation has overtaken you except what is common to mankind. And God is faithful; he will not let you be tempted beyond what you can bear. But when you are tempted, he will also provide a way out so that you can endure it.”

There is always a way out.

I explained this to my son and shared that I, too, do things sometimes I don’t want to because of temptation. Like eat too many scotcharoos. We talked about things he could have done differently instead of eating the chocolate chips we needed for the recipe: put them in the pantry so they weren’t in his way or even ask permission.

The chocolate chips weren’t really the issue, he only had a few. The issue was that I needed those for a recipe, had explained that, and my kids understand they aren’t allowed to get food without permission. He knew that he shouldn’t, and did anyway.

There are days when I know I shouldn’t raise my voice at my kids, and I do. Or days I know I shouldn’t go back for seconds (or thirds), but I do. Perhaps you are dealing with some things you know you shouldn’t be doing, but do it anyway. I want to encourage you today, that you aren’t alone, and you don’t have to give in. You can resist temptation if you look for the door God has given you to get out!

And when you do find yourselves, once again, doing what you shouldn’t, falling into temptation, be honest. Repent. Ask the Lord’s forgiveness and for forgiveness from those around you. Although it is very humbling to admit when we have done something wrong, it also strengthens us to avoid doing it again.

God, today I have done something I know I shouldn’t have and I am sorry. I want to live righteously and holy, a life pleasing to you. Please forgive me and help me to resist temptation. Strengthen me as I walk close to you to avoid the things I know I should not do. Thank you! Amen.

Mix together in a saucepan until boiling. Remove from heat.

Stir in 1 cup Peanut Butter until smooth and creamy.

Spread over cereal mixture in pan.

Resist Enjoying too many times! 😉

Helping women find purpose, develop a deeper relationship with God, and help each other through God's Word. View more posts

This site uses Akismet to reduce spam. Learn how your comment data is processed.